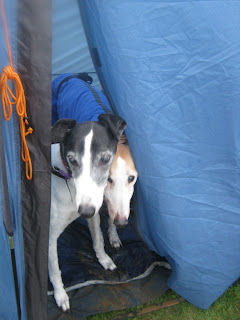 Budemeadows Touring Park
Widemouth Bay
Bude
Cornwall.
EX23 0NA
We probably lost all senses we had left and decided go camp in our very basic tent in Cornwall for new years eve. We looked on ukcampsite website for a site that might be open for new year - not really expecting to find any - and noticed budemeadows was open year round. Great.
Booking was very easy. We enquired via email first to make sure they were open and did have space available and then followed up with a phone call to book and pay for the pitch.
We require to be near to the facilities due to one of the parties limited mobility and Budemeadows were very helpful in answering any queries we had and accommodating our needs. Once the pitch was booked and paid for - £12.50 for 2 adults, 2 dogs, one tent and one car for one night - the proprietors sent us out booking confirmation and detailed directions to the site (with 3 route options depending on if you wanted the shorter more complicated route or a route which is longer but uses main roads as opposed to lanes, etc).
On arrival you pull up to security barriers and have to leave the car to go in to reception to "check in" where you are told your pitch number and given info on the site and local area; including where the local supermarkets are and of course the site rules which are pretty obvious and reasonable - no noise after 11pm, speed limit of 5mph on site, dogs on lead, no unattended children in the pool that sort of thing.
The pitch we had been assigned was completely waterlogged and so we were offered several alternatives and shown these to see which we thought best. All pitches were wet; after all it was the last day of December and we have had some pretty heavy and persistent rain lately. but having made a decision on where we thought best to set up; we were left to get settled in.
The ground in predominantly clay and like I said was very wet but surprisingly; the pegs were not only easy to get in the ground they also stayed in the ground through some pretty intense winds during our stay.  We decided to go off site for a couple of hours to get some food (and get out of the wind which was trying its hardest to uproot the tent - I wasn't certain it would still be standing when we returned). Unfortunately whilst we were off site we had some heavy rain and the tent wasn't as waterproof as I had imagined so we returned to muddy puddles and a slippy-slidey pitch (obviously not Budemeadows fault though).
Although we only stayed one night I had plenty of opportunity to try out the showers and launderette washing the mud off myself and drying out my clothes -first when we arrived after a walk in the rain with the dogs  and again in the morning when I realised my coat was soaked from the rain that got in to the tent overnight.
Showers - spacious, hot (but easily temp controlled), clean (quite an achievement given the weather). 2 cubicles in women's and men's toilets. separate individual showers at the back but these weren't open in winter PLUS a wetroom in the disabled/family bathroom AND a separate fullsize bath. Hair driers mounted on the wall for use. All included in the price and unlimited usage. No rushing to wash your hair and rinse the soap out before the water cuts off.

Toilets/wash facilities - Again clean, hot water. several cubicles with both WC and sink plus other cubicles which just had the WC with the sinks outside as you would find them in a public bathroom. Hand driers.
Launderette - 2 large washing machines and 2 huge tumble driers. didnt use the washers but they seemed reasonably priced. the tumble driers were (I think) £1 for 10 mins which is again a good price. especially considering you dont pay for anything else.
Washing up facility - Large room, plenty of sinks to easily avoid a queue when the site in busy (and inside which I've never seen before - its normally a bowl of water outside the bathrooms at other sites I've stayed at.) Bring own washing liquid.
Other facilities - Plenty of bins plus recycling bins. taps for your drinking water. chemical disposal points and grey water disposal points.
In high and mid season the site also benefits from having a swimming pool, shop, bar and games room. plus an outdoor play park and games area with giant chess, table tennis, etc. It also (again in season) sales food and drink to eat in or take away.
Plenty of leaflets, info packs in reception on all the local areas, taxi companies, take away menus, pubs, restaurants, etc.
Nearby to local attractions- cinema, soft play, swimming pool with flumes, bowling, plenty of beaches, surf school, fishing, rock climbing, etc. Short drive from major tourist attractions country parks, zoo's, museums. Near to port Isaac, Bodmin Moor, and other major towns.
Bar in wifi enabled, no min stay rules on site and you can arrive/leave any day of the week so dont have to stick to traditional sat - sat or mon - fri/ fri - mon holidays.
Great location, friendly staff, great facilities onsite especially in peak season, fantastic prices. Lovely area. Got to give the site 5 out of 5. The weekend 4 out of 5 because of the sheer amount of wind and mud but I didn't expect sun at the end of December. We will be back I'm sure when the weathers warmer and drier. Thanks for a lovely weekend.