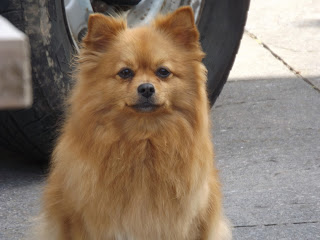 We had been checking out menu's and signs that said they were dog friendly whilst waiting for our boat ride on the Princess earlier in the day and hooman girl had spotted something interesting she liked the sound of on one of the menu's near the harbour, we went off on our boat trip and then wandered around town for a bit as it was still only around 3pm then we remembered to go check on our parking and decided to go check out other local towns, on the way our of Ilfracombe hooman girl suddenly remembered she had wanted to stay there for dinner and so after a short trip to visit another town and beach we headed back to the pub we had been past earlier. There was a sign about their sun terrace (I dont think that's what they called it but yeah outside area!) and we decided since it was still quite nice out to go have a look, we had to go through the front door in to the pub and were greeted by a hairy retriever and a small hairy rabbity dog (I'm not 100% 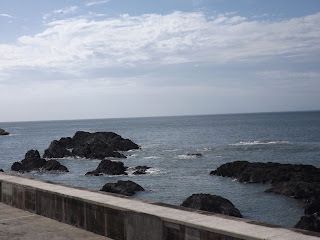 certain what type of dog she would of been!) They both had a shout about my arrival but the hoomans in the bar said not to worry they were friendly just shouty and the called the little one "The landlady" which we liked and thought was quite funny. We headed out back to the outside again and chose a bench (There's no grass, just a level courtyard and then up a steep set of steps another little area that over looks the whole bay, it was nice but no way was I going to get up there at my age, with my houndie legs and lack of co-ordination so we stayed down the bottom!), both the dogs followed us out and continued to shout about the food and the view and then the bigger one went off to find something else to do whilst the little one who was called "Honey" I presume because of her colouring sat down across the courtyard to watch us, I took the opportunity to ask for my packed lunch from my bag since I hadn't eaten since I got up that morning and Honey thought what I had looked interesting so she came over and had a sniff, hooman girl offered her a piece of my dinner (what was just samples of 2 different kibbles I won at shows recently) but Honey said no thanks but she stuck around for ear scritches for a while before she decided to go back to shouting and the hoomans from the pub came out to tell her to be quiet and I think she got a time out coz she went inside and I could hear her upstairs after that shouting about being in prison. 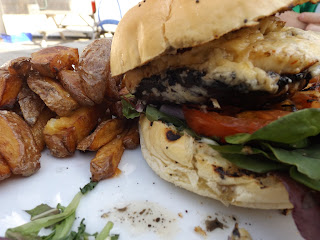 A little bit later the hoomans dinner did arrive, Hooman girl had the shrohaloomi burger  (probably not how they spelt it) which was a mushroom with haloomi cheese and chedder cheese and salady bits served with chips and salad. Hooman boy had asked for the goat cheese pie coz he was intrigued by it however it was unavailable so he chose the bacon cheese burger instead. Hooman girl was so glad she remembered to come back coz the burger was delicious and the chips were extra delicious; no idea what they did to them but they were scrummy! Hooman boy also said his burger was really nice and was equally enthusiastic about those chips. The food isn't cheap but like they say "you get what you pay for" and the food was good and good sized portions to boot and the views from that deck in the summer would be pretty pawsome too.
We really enjoyed our visit and would love to come back again. Highly recommend a visit to The Pier.