I am so hexcited. For the 1st time ever we are able to go up to Nottingham for the Great Greyhound Gathering (GGG).

It always (well usually) falls on the weekend of hooman girl burfday which is always the weekend we either go on holiday or are coming back from holiday so we always miss it. well this year its the weekend before.

So we packed the wheelies with:

My Bag which included:

1 pair snuggly camo PJs
1 rain coat
1 fleece coat
1 racing jacket with my name and website on
5 bandannas
first aid kit
tubs for noms and water
bottles of water
a brush for mah furs
1 pack of joint care + chews
1 bag of harringtons training treats
1 bag fishy flapjacks (to share with my fwends)
selection of pooh bags
Plus 6 tins of dog meet
and my pretty house collar, my walking collar and my lead which I will wear on the way.

We decided to go up to Nottingham on Friday morning and stay until the Monday afternoon to fit as much visiting in to the weekend as we could manage. (I will write separate posts on the playdates we had whilst away)

We left our warm cosy house at 7am on Friday *yawn* I had a little sleep in the back of the wheelies whilst hooman girl drove and hooman boy complained about being bored (he's worse than a toddler on wheelie rides). Then at about 9.20am we got to the end the M5 where we had decided to stop for a break to do wee's, get some noms and see a fwend of ours.

We went to Sanders park which is in Bromsgrove to achieve the 1st two then went on a very short wheelies ride to our fwends house. he's a seagull - but not a flying one he makes bowt engines called seagulls. (I not go pretend understand anything about them so you can go visit his website and see for yourself how clever he is. It was sooper luffly visiting wiff him, we ended up staying waaay longer than we were meant to and I had some more sleeps on his floor (after I'd dribbled in his kitchen and left my nose art on his patio doors).

Then we set off again (via halfords we needed fuses for the wheelies*shrugs*) got on the motorway again and headed for Nottingham where we were meeting my twitter buddy Rappa (More on that in a later post) and after that we went on a hunt for our campsite (it was hiding), set up camp and ... all promptly fell asleep after the long day.

So in the morning when we woke up it was Saturday and the day of the GGG (we were up quite early so we got washed and dressed and went to McDonalds for breakfast (well hoomans did I did some more sleeping in the wheelies with them watching me from the window). We went back to the campsite for a bit to help my fwend Tom and his hoomans put up their tent and then we were ready to go off to the GGG event.

(fast forward through driving, getting lost, traffic jams and we arrived)

We went on in and headed towards the dogs n dubs stall coz we know them from facepoop, had a little look around at their pawsome clothing and had a chat to the hoomans and a sniff of the huge deerhound Duffy.
Then we bumped in to some fwends - Dolly wiff Charlie and Dino and Diana wiff Joe and Lilly - and after a little chat we realised we pawgot get our numbers for the dog show so we went back out to the front and stood in line to get our number and a roseyette just for coming. Saw Elfie and Molly and mah ontie Jayne from demontforts and spied Bully and his Cav sista from Twitter (but didn't get time to say hi) and then it was  time for the show. 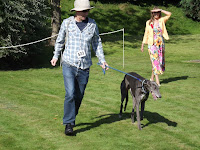 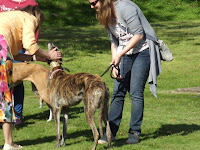 My fwend Joe was up 1st and did real good. he got 6th which is fabaroo for Joe coz he quite askared still. Then it was my turn and Lilly was in my class too :) we didn't win BOL 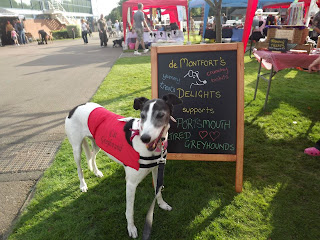 We did some more looking around but I was in quite alot classes so we had stay close for when I was called for my next turn.
I was in Best vetrun greyhound bitch, best vetrun any breed, best AV hound or terrier and prettiest bitch.

I got mahself a nice purple 6th in AV vetrun which ah wuz berry pleased wiff. :) oh and ah saw mah fwend Breeze coz she was in most my classes wiff me too.


We stopped for lunch and got phish and cheps from the van (it wasnt sooper luffly) and finally we bumped in to mah otha fwends - there was Hugo, Tina, Zak, Holly & Harry (well I seen them a bit earlier) , ummm ... and some more I dont memba everyone ah saw now BOL oh and David. I bumped in to David a few times too. was fabaroo.

The Facebook gang all had us foto taken by the dogs n dubs stall and then the twitter gang went fur zoomies on the race track. It was greyt.


I went to visit my ontie karen and fwend Soxi on the "rubbins" stall and got me some rubbins. ah wuz really proud coz her sed ah in fantastic condition for my age (tho she also sed I fake my wonky left leg coz theres nothing wrong wiff it - whatever! BOL) her also gave me some fishy skins which were nommy - Thank You! 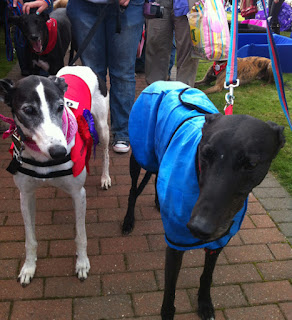 I met Rolo Hound from Twitter. he's wearing his sooper keep cool coat I need me one of thems. he was sooper nice and he put me on his fur friend friday blog when we got home. You can read his blog here

We went back to the ring for the last set of classes we watched the fancy dress and the best RGT rehomed hound (or whatever they called it) and then I was up for the prettiest bitch class - well I didnt get placed in that either - boohiss!

Then it was soon time to go home, so I did my rounds of saying goodbye to mah fwends, sharing some noms wiff dem and telling everyone we'd see dem online soon. 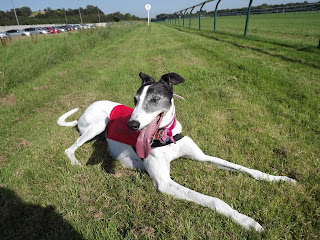