We attended the 1000 sighthounds event at Escot last Sunday and had a soopa time!

We saw lots of other pointy noses including some good friends of ours. There was Poppy, Pixie and George with Ontie Jo, Ernie with Ontie Amanda, The whippet clan with Ontie Dawn, Bran with the hairy hooman, my fwend Tink from twitter, Mick wiff Ontie Sue, Gin wiff Ontie Kim, Ontie Jenny wiff Georgie and Shadie, Ellie and Bill, Sara and Callie with Ontie Kathryn from Milgi Coats, Rolo and Star, Little Joe (who was adopted after last years 1000 greyhound event), Elvis (he's not got a pointy nose though!), the 2lukis and my Ontie Claire and George hooman wiff Ellie and Tilly (you'll all remember Tilly from when she was Chrissy and we fostered her over Christmas last year!) It was soopa luffly to see orl mine fwends but especially soopa to see Miss Lurcha (Tilly) again!
I am soopa proud of Tilly, her has been werking very hard to be more sociable with other dogs and not do shout shout lunge or snap snap grrr at everyone. Her had a tough start in life but her in a luffly home now with luffly hoomans and a pretty sisfur and lots of luff! Luff yoo sis! <3

Unfortunately I had a baddy leg after I got a little over hexcited during the week and snapped mine dew claw right by the skin, it was very owey coz it didn't come all off and I had to wear a silly bandage to protect it which meant a) I looked like a pillock and b) I had a silly hop hop limp going on. I still had a nice time and did the whole walk (was about 1.5 miles apparently!) but I did it verrrrrry slowly and came last. by the time I got back everyone was sitting down to lunch and no one was there to greet me on my return.


but luckily the downpour of rain waited until I was back atleast. 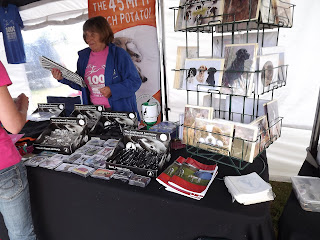 There was also lots of stalls to look around, things to buy and treats to try. I had some snozzages from the hounds first sighthound rescue stall that Ontie Jo was helping with and some bizkits from the Groomed to Pawfection stall, I also got a new bandanna from the greyhound sanctuary stall and the hoomans got a pile of t-shirts from last years event (apparently George hooman had said he wasn't taking anything home so I kept hearing throughout the day from various people!).


Then there was the dog show, there was a nice selection of classes and we sponsored one of them (Best veteran) and then entered it (didn't win though BOL) My friend Shadie got a special rosette though for being joint oldest in the class at 14. There was so many soopa hounds (and other breeds too) that it must of been a soopa tough decision to pick the winners in the classes.

Once everything was done we walked around and said bye to everyone that was left and then hopped back to the car and headed home!