We went to canonteign whilst in the area recently (we have been before last year) as we thought it would be a nice trip to complete our day out after visiting haytor in the morning.

Canonteign is reported as being the highest waterfall in england standing at 220ft. as well as the big waterfall it has a couple of lakes, 2 play parks, bee hives and some footpaths you can walk. the "official" way up the waterfall is really hard work with uneven stones to climb over and steep muddy slopes to contend with, there is another way which is advertised as the way down and is a series of ramps and footpaths, much much easier.
The waterfall is man made (I think it use to be natural but has been manufactured to how it would of looked when it was the family home of the first viscount of Exmouth Edward Pellow in the 1700's.) but you do get some nice views on the climb up there and it's nice to be able to say you climbed the highest waterfall in england (you can buy certificates in the gift shop)

Entrance prices are quite high £7.50 for adults £5.75 for children. under 4's free.
they do have a well stocked gift shop and a cafe which sale ice creams well deserved after the climb. 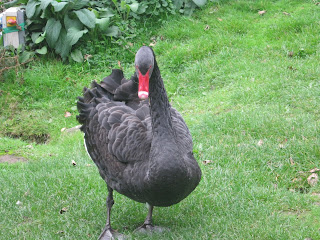 If you dont want to climb the falls, there are the other areas you can walk around, the lakes are quite nice and its a nice setting for a picnic on a summers day - just be careful of the black swans who are very pretty but dont think twice about surrounding you and hissing at you for being on their land.
4 out of 5
Posted by Camping and Exploring with Dogs