Yesterday was the whippet tea party and family dog show at Port Eliot estate in Cornwall (just in Cornwall!!) I did hearing abowt it on the facebook from a couple of mine whippety fwends and fawt I would like to go along. So I packed mine bag - wiv mine treats and mine noms, 2 coats and a towel, my bandanna, some pocket money and mine camera - and off I went.

We got to Port Eliot and parked the wheelies, got out the car - I had a real qwick wees coz I wuz BURSTING! and walked down to the gardens where I could see lots happening. There wuz tents full of exciting things, a wookie and darth vadar wuz der too and there wuz agility and doggy dash and a show ring where you could show the judges how bootiful you wuz.

First we looked at the games tent (but I didn't want to catch crabs or anything so we didn't play) then we stopped to chat to the good dog guide people and entered their competition to see if we could win some shopping vouches for Dougal's Den, I did some sniffing wiv other doggies too. 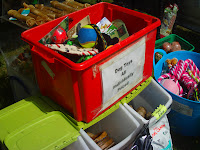 Then we moved on to a stall which wuz selling all sorts luffly doggie things, it wuz called Freckles  We had a look around and I did inspect all the pots and boxes and sniff all the noms and toys before deciding I wanted to buy a new brush/comb to do my furs wiv. 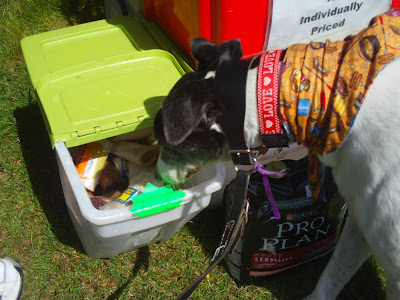 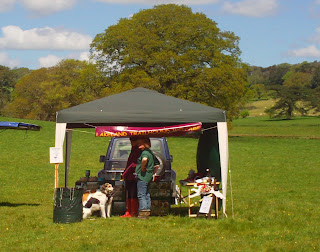 Next on the list wuz the traildogs welfare stall where they had a "doggy dip" which I had a go on (I won a rawhide bone!) and a tombola which hooman boy played and won a camera (not a bery good camera but it a camera none the less!)

So I spotted a "have a go agility" course and thought it would be a good opportunity to see if my jumping on the beach and walking on walls had paid off. I lined up behind the other dogs and did waiting my turn and the lady came over and said I could have a go if I paid my money - which I did - Hooman girl told the lady I would be ok to jump but wouldn't go through the tunnel. Well the lady insisted I try the tunnel and I screamed at her to stop shoving me. But  I did the jumps and the "dog walk" (it was 3 planks of wood balanced on some boxes. Here's a video.

Any way I got some sample pack of treats for trying and I'm quite proud of myself for doing it.

We went to look around the rescue stalls too, I saw the Scruples stall which wuz belonging to a lady I wuz talking to on facebook. We bought 2 fridge magnets off them and I did sniffing with some of the scruples hounds and met noodles who wuz preparing herself fur the whippet tea party.

Then we got some food and went and sat on the hill watching the goings on, before I went fur a walk with hooman girl to look for my fwend Mervin who we did finding eventually back by the scruples stall. 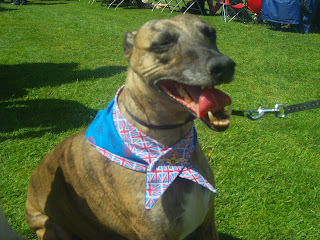 Me and Mervin did some talking and sniffing of each others, we dizcussed us bandannas what we both did get from Elfie's muvva. and we dizcussed about the tea party and about the greyt dog meet what he comed to in March and then we both did lie down whilst the hoomans chit chatted a bit.

and finally the moment we had all been waiting for....the whippet tea party. 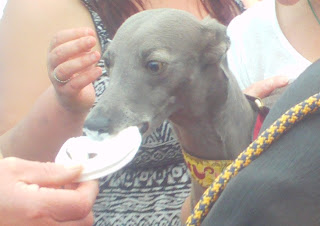 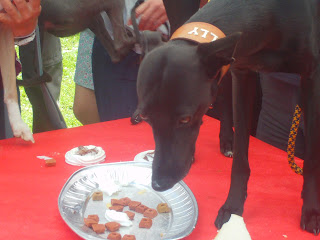 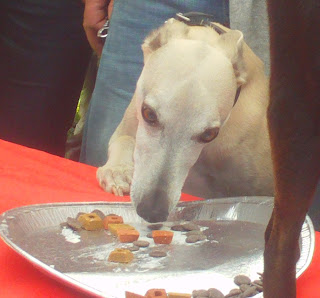 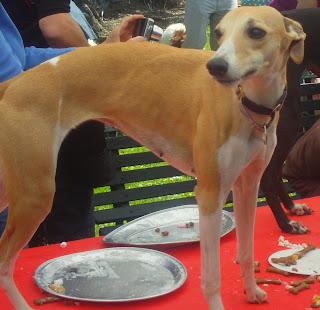 The noms didn't last long though

I got chance to sit down and sun bathe wiv Mervin before we went home and we got rosettes fur attending the tea party too. 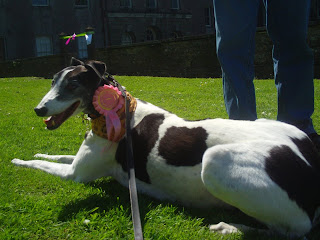 Me and Merv wiv us rosettes :) 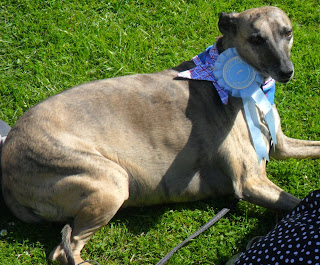 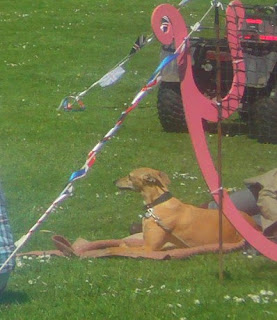 And here is a video montage of the day