Finally the day we had all been waiting for arrived. It looked a little worrying on the Thursday when all we saw all day was rain,wind and more rain and wind.

The local lawn had armed forces themed stalls and events all day Thursday which got a few people out their homes but not many were brave enough to face the bad weather - I was one of the crazy people hounds who went to have a look.


There was this old  plane there - well not  a whole plane just the nose section of it.

It's an Avro Shackleton! Here's what he says about himself on his facebook info


I am WR963, an Avro Shackleton, one of the last of a dying breed of Avro aircraft.
There were 185 of my sisters built, now none of us fly and there are less than 20 of us left. I served the United Kingdom on the front line during the cold war, searching for submarines and later in my life I was an airborne early warning aircraft. I retired from active duty and made my last official flight to Coventry Airport with my sister WL790 during 1991. WL790 flew away to the USA in 1997 leaving me behind.I am cared for by a charity group - the "Shackleton Preservation Trust". They are engineers, ex-aircrew and enthusiasts from all walks of life, and if it wasn't for these people I would almost certainly not be here today. It's highly unlikely that I'll ever once again feel air under my wheels, but I conduct regular engine runs and hopefully soon taxi runs at Coventry Airport. 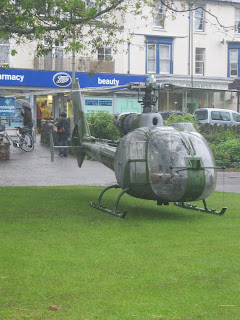 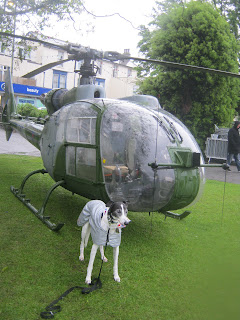 and there was this helicopter on the lawn too - dunno how he got there. Though he is more whole than the plane.

It's a gazelle apparently. The Army Air Corps brought it along. Apparently it's still one of the fastest helicopters ever built. It can go 198mph and has served all four branches of the armed forces. but today it just sat there and looked pretty.

I stopped to pose with it (in the rain!)


There was also Birds of Prey, Go-Karts, and other stalls.

So that was Thursday - I heard ALOT of people saying they are sure to cancel Friday - well not cancel the day it self but cancel the air show - but Friday arrived. The sun was out, though it was still pretty windy. And the air show  was a go-go! (if with some cancellations and minor re-adjustments!). 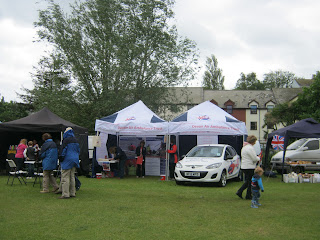 We went down to the lawn again and had a little look around - talked to the lady from the Devon Air Ambulance  looked in the stalls. The man from the Royal Marine Association recognised me from Thursday and asked why I wasn't wearing my commando patches.

We saw the flying machines coming over at this point so me and hooman girl made our way to the sea front to watch the show. 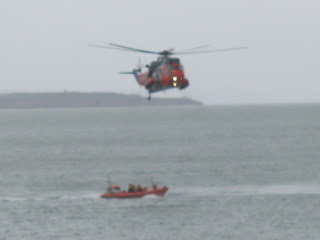 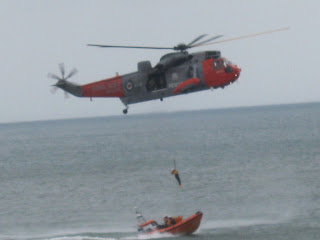 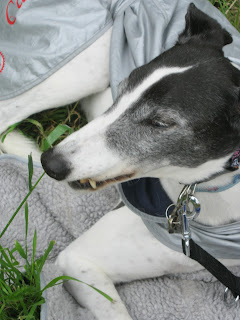 I got to nomming some grass while we waited between demos. 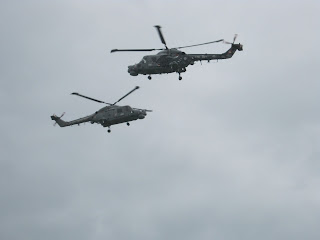 The Royal Navy Black Cats - They were amazing. They fly so close together and have luffly decals. 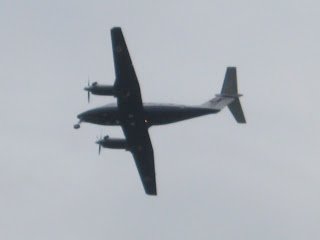 Beechcraft King Air - we saw him on wednesday as well heading to Exeter to beat the bad weather. 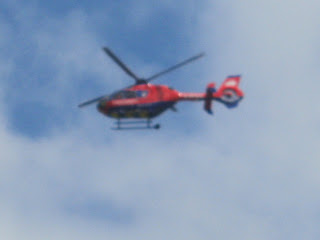 The Devon Air Ambulance did a fly past for us. 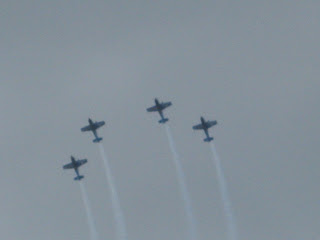 The Blades display team - They are all ex red arrows pilots. and did lots of twisty turns and rolls. They are also a luffly blue colour! 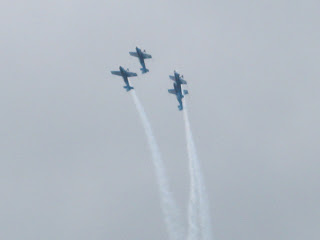 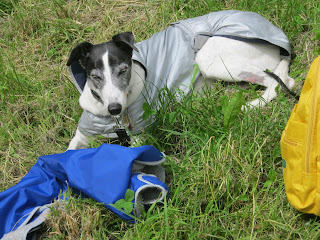 Here's me again enjoying the sun on mine furs and listening to the planes and helicopters whizzing past. 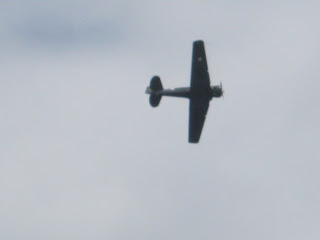 This is a last min substitution. It's a Texan T6.
T6 Texan was a single-engine advanced trainer aircraft used to train pilots of the United States Army Air Forces, United States Navy, Royal Air Force and other air forces of the British Commonwealth during World War II and into the 1950s.

And finally what we have all been waiting for THE RED ARROWS. 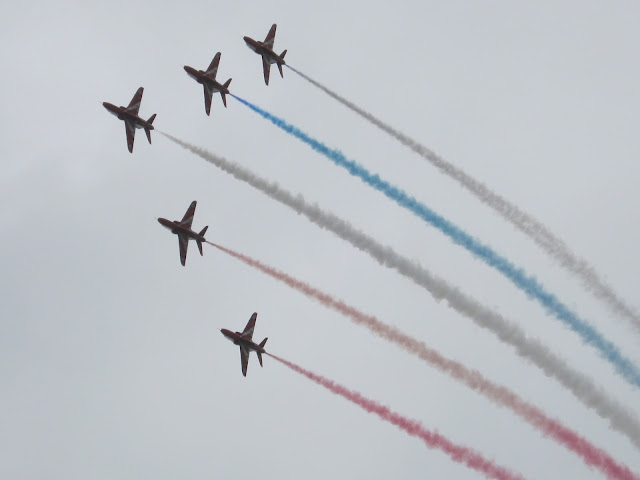 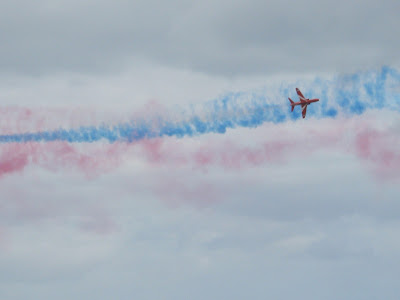 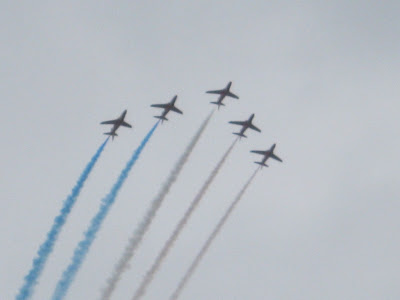 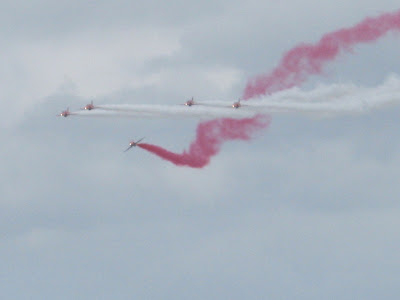 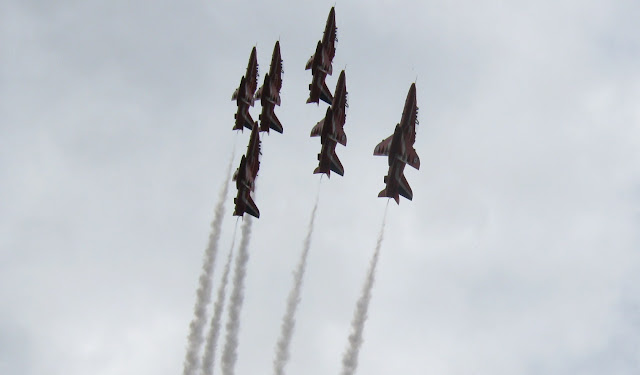 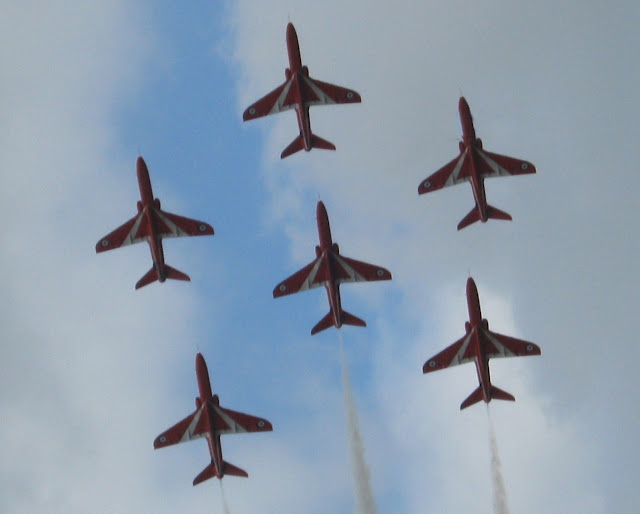 After the Red Arrows had done flying that was  the end of the air show. Me and hooman girl went back over the lawn and had a look around and then did some walking on the beach once everyone had left and then treked back up the hill to home. It rained a bit but the sun was still out so this happened - It's a rainbow! 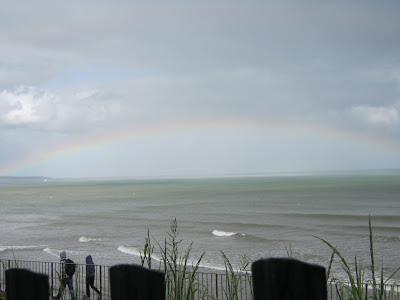 Here's a clip of some of the demos